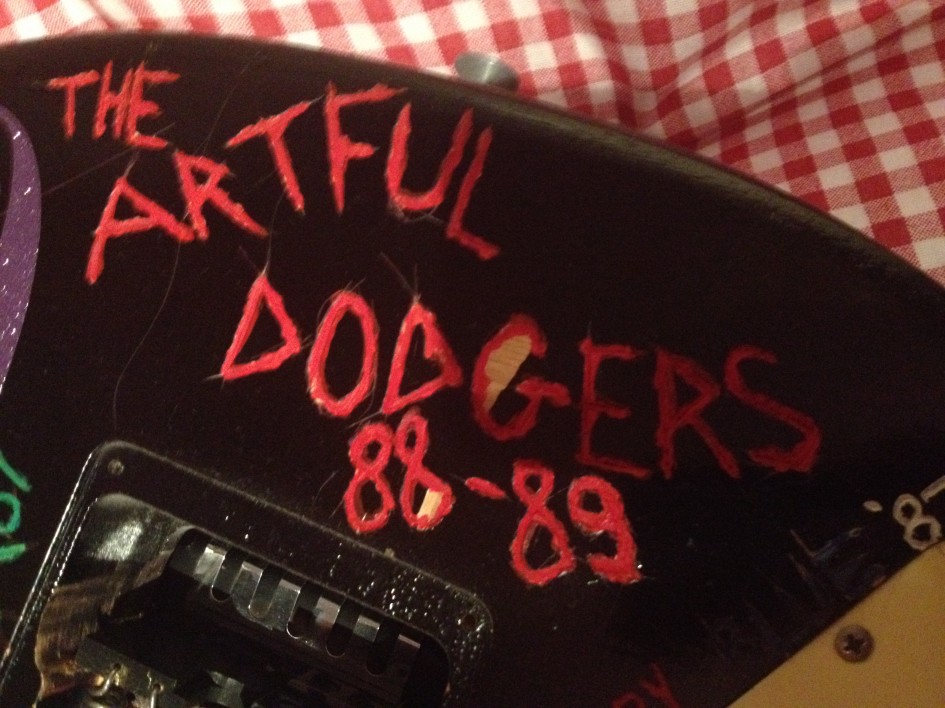 The Time I Almost Died (Part 1)

According to the dates gouged into my battered 1983 Ibanez Roadstar, the following events took place in the winter of 1988/89. This story is as factually accurate as possible, considering it all happened 25 years ago, and I was drunk for most of it. 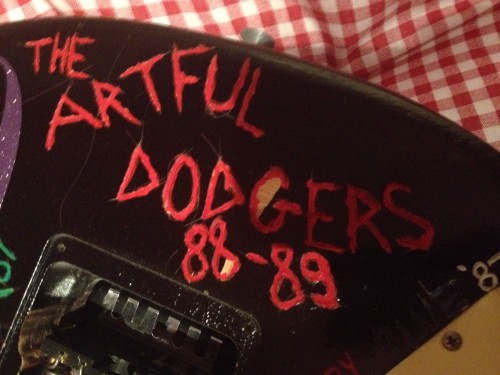 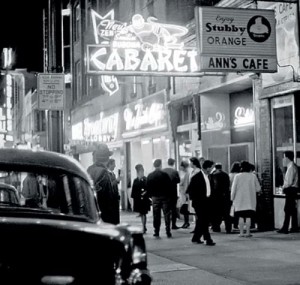 Look at all the people not nodding off.

In its heyday, the Buddha was a legendary nightclub that featured the likes of Ike and Tina, The Kingsmen (“Louie Louie”) and the band that eventually became Heart. There’s a persistent but unsubstantiated legend that Hendrix got fired from the Buddha for being too loud.

By the time we got there in the late ’80s, it was a skid row shithole run by a cocaine dealer who enjoyed shattering the orbital bones of junkies who fell asleep at their tables or on the floor or wherever. He was good to us, though. The Buddha’s clientele were exactly the kind of people you’d expect to find at Main and Hastings. Welfare Wednesday – when all the junkies got paid – was too difficult for me to describe here. I lack the vocabulary. You had to be there.

I guess the best way to describe The Dodgers is that we were a jam band. We never rehearsed. We just learned songs on stage. Mostly ’60s and ’70s rock, with the odd original song thrown in. It was a great learning experience, but I had more than my fair share of moments of terror and confusion.

Other times it was a total mess. I was the youngest guy in the band by at least a decade, so our catalogue of “commonly known songs” had some gaps. There were plenty of occasions that I’d just ride the root note until Donny yelled at me.

“HOW CAN YOU NOT KNOW THIS SONG?”

“I WAS ONE MONTH OLD WHEN IT CAME OUT!”

After a couple of months of this, we decided to hit the road. In those days, “hitting the road” for a new band meant northern B.C. and/or Alberta. You’re thinking Edmonton. I’m talking about High Level.

Joe owned an old school bus that he’d converted into a band bus. This means that most of the seats were removed to make room for the PA, lights, instruments, luggage, and the Glad bag full of weed. He’d built a plywood bulkhead to separate the cargo from the long hairs, and there were two bunk beds mounted to it. The rest of the passenger area had 4 of the original seats, and the driver’s seat. The bus had been painted blue, and there was 4′ X 8′ hole in the roof into which Joe had put a slab of plexiglass that he claimed was an airplane windshield. “It’s a moonroof,” he said.

To the best of my knowledge, The Bus had never been north of Lonsdale and 13th, North Vancouver. Our first stop was Grande Prairie, Northern Alberta – in the dead of winter. The Bus was more or less waterproof, but it had only a basic “West Coast” heater. Remember this detail. It will be important later.

We left Saturday morning, because we didn’t really know how long the trip was going to take, and we had to be there to set up and sound check on Sunday. Joe did most of the driving, but he got subbed out every couple of hours or so by Johnny Guitar or Jack Lightguy, whoever of the two was the least drunk or high at the time. Donny Drummer was a heroin addict, so he wasn’t allowed to drive at all. He was in the methodone program, but still had a bit of a cokealcohoweedodone situation going on, and was highly unstable most of the time. I was the baby of the band, so none of the other guys trusted me to do anything. I didn’t even know the bass line for “Not Fade Away”, after all. How could I be trusted to drive? 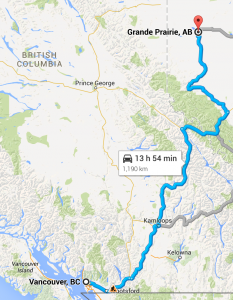 We arrived in Grande Prairie at about 2 p.m. on Sunday because even though it’s only supposed to be 14 hours from Vancouver to GP, The Bus wasn’t capable of full highway speed. We stopped regularly for pee and munchie breaks, and a couple of alcohol- and cabin-fever-induced punch-ups.

After a few hours of sleep in the club’s parking lot, we started loading in. That’s when we discovered the venue was a dance club, and they were “experimenting with live music”. It was very shiny inside. Everybody who worked there had nice haircuts and fashionable shoes. They smelled good. We, on the other hand,  hadn’t showered in days and we had 1974 Keith Richards hair. Our wardrobe was jeans, leather jackets and biker boots. The situation didn’t feel very promising.

We played one night in the shiny club and got fired. Our sound guy was hammered and picked a fight in the parking lot with Donny. He had him pinned down and was comically attempting to head-butt him while Donny calmly said, “Somebody get this guy off of me before I have to kill him.” Donny had learned how to fight as a child by defending himself from his alcoholic father, so I’m pretty sure he wasn’t making an idle threat. Anyway…I broke up the fight by kicking the sound guy in the temple a couple of times. I assume I broke his nose, too, because it sure was bleeding a lot when he hopped up, went to the bus, stole Joe’s portable stereo and literally ran off into the night. We never saw him again. It was very Coen Brothers. 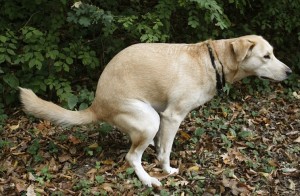 We were booked to play Valleyview the following week, so we phoned the guy who ran the place and asked if he’d put us up for the week. We were homeless and it was too cold to sleep in The Bus.

I’d played in The Valleyview Hotel once before, and had sworn never to go back. I still have bad dreams about the place decades later. It had a similar vibe and decor to the Buddah, except it was more violent and more run-down. But it was either Valleyview or sleep in The Bus for a week, so we pointed ourselves east and hit the gas, our guts churning with fear and loathing.

I actually met Satan the first time I played there. Did you know he was a native fella? You’ll know him if you see him, because he has a tattoo on his hand that says “Satan” and he’ll say to you, “I’m Satan, so you better play some AC/DC.” Not a bad guy, but much shorter and less on fire than I expected him to be.

The group that was booked to play that week had already settled in to “the band rooms”. In case you’re unfamiliar with what that means, let me give you a quick run-through:

Because we were intruders who arrived a week before we were supposed to, we were assigned “the old band rooms”, which were worse. Use your imagination.

The first night we were there, we decided to be friendly with the other band and threw them a party after they’d finished for the evening. Around about 5:00 a.m., their guitar player decided to show us his pistol. It seemed like a cool thing to do until he handed it to Johnny Guitar who, assuming it couldn’t possibly be loaded, decided to pull the trigger. When a gun goes off in an enclosed area like a hotel room, it doesn’t sound like it does in the movies. It’s louder. Way louder. Way, way, way louder. 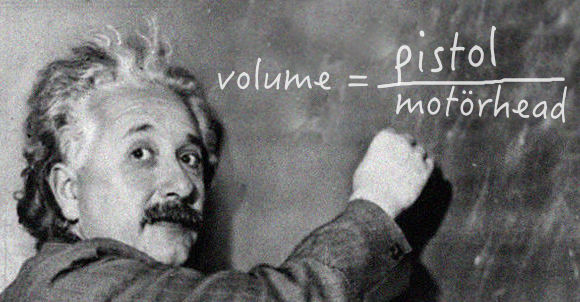 Fortunately, Johnny had the gun pointed at the floor. Also fortunately, there was nobody left in the pub directly under us, because when we checked the next morning, the bullet had gone straight through the floor (or ceiling, if you happened to be in the bar) and a bar stool. If somebody had been sitting there, they’d have had an entry wound in their cowboy hat and an exit wound in their taint. As it was, nobody noticed because the pub was a raggedy old dump that was full of random holes and so forth.

After the air re-entered the room, the guitar player asked for his gun to be returned. Johnny obliged. I excused myself and went to my room to cry.

The rest of the week was mostly uneventful. We kept to ourselves, drank all day, made a significant dent in the bag of weed, and hoped there would be no more surprises.

The following week, when we played our scheduled gig, was also mostly uneventful until Saturday night when we’d finished. Joe went to collect our money, and the bar manager told him he was withholding half of it to pay for our rooms for the previous week. He’d not mentioned this when he offered to put us up, so this was definitely not cool.

When Joe came and told the rest of us what had happened, Donny didn’t say a word, but left immediately to rectify the situation. He was wearing a leather biker jacket, boxer shorts, and a lovely new pair of Air Jordans he’d shoplifted before we left the coast. The rest of us tagged along as he stormed down to the manager’s office. What followed was a scene out of a Bruce Willis movie.

Donny kicked the office door open, marched in, grabbed the manager by the throat with one hand, grabbed a wad of bills from what I assume was the evening’s bar sales with the other hand, and said – about three inches away from the manager’s face – “MINE!” Sort of like the seagulls from “Finding Nemo” if they were angry, skid row heroin addicts. 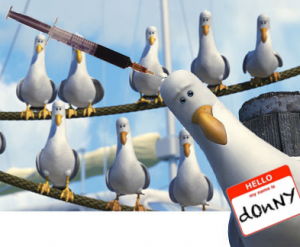 Being that he was about 65 and had a gimpy leg, the manager wasn’t in a position to defend himself from Don. He did, however, own a telephone. We thought there was a reasonable chance he’d use it to call the RCMP, and after a short band meeting it was decided Donny would stay in the office and babysit while the rest of us loaded up The Bus.

Deep down, ol’ Donny was actually a pretty nice guy, and once he calmed down I think they ended up playing cards for a couple of hours. I think the manager won back some of the disputed money. By about 4 a.m., we were ready to head out. Don and the manager shook hands, the cops didn’t get called, and we parted on good terms.

Coming in part 2, the road to Ft. McMurray…the part where I almost die…

Through That Window Over There