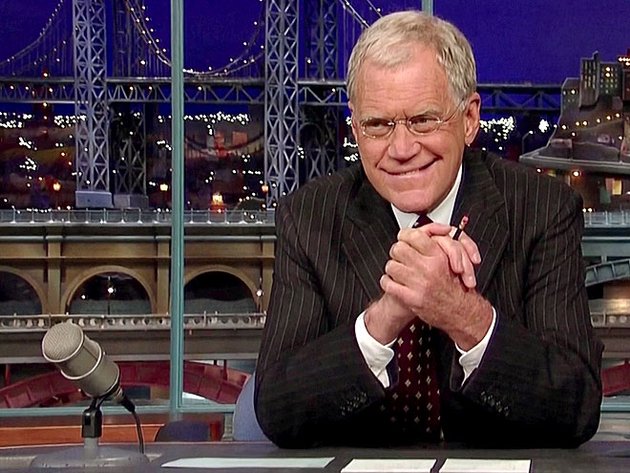 I can’t remember how I first learned that David Letterman existed. It was in the 70’s for sure, because I remember being excited for summer holidays 1980 to begin so I could watch his short-lived morning TV show. It was the summer between 10th and 11th grades, and the school year ended early due to a teacher’s strike. Bonus.

At the end of one episode, there was a birthday cake covered in candles, and then a bunch of confetti was dropped. The confetti caught fire, and the credits rolled over a chaotic scene of flames, extinguishers, and people rushing around looking panicked while Dave just stood in the middle of it all with a slightly bemused look on his face.

I was in love.

It was a bummer when that show got gassed, but because I already new what to look forward to, it made the prospect of his new nighttime show announced a year or two later so tantalizing. I was already a Carson fan, so having Dave follow him was a can’t-miss TV appointment for me. I didn’t miss a single episode for at least 4 years. I saw the very first Top 10 list. The very first Stupid Pet Trick. The very first watermelon being thrown off the roof.

Marc Maron calls them “cranks”. Curmudgeons who are so smart and funny that you can’t help but love them despite their perpetual “get off my lawn” disposition. Fictional people like Bill McNeal from NewsRadio, Gregory House, and Roseanne. Real people like Lewis Black, Eric Cartman and Letterman. It’s a hard thing to pull off, because they’re walking a knife’s edge between being funny and being bitchy. It takes a special type, and I’ve always loved that type. I suppose I’ve tried to mimic it with varying degrees of failure. There are days where I have to remind myself that life isn’t a TV show and I can’t say certain things. Too often, I say those things anyway. Que Sera, Sera.

Anyway…I kind of fell out of being a regular Late Night and Late Show viewer. Other things in my life became more important, but I still usually managed to catch a couple of shows a week. Once a fan, always a fan.

As I finish up writing this post, we’re a half-hour away from the final show starting. Dave’s been part of my life for at least 35 years. He unknowingly taught me things and influenced me, as he did with millions of others.

I don’t think I’m emotionally prepared for tonight. I’m gonna miss Dave being part of my cultural landscape. This one hurts a bit.