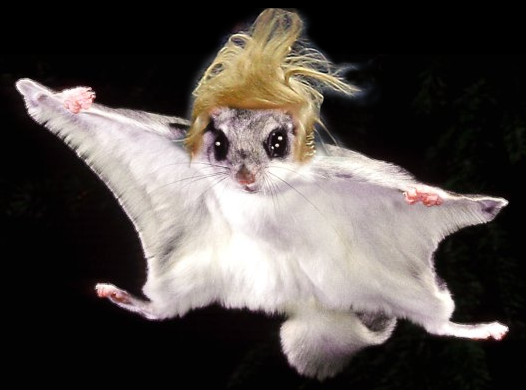 Ten Things You Need To Know About Flying Squirrels

February 2, 2017 / Aye Pancakes / Comments Off on Ten Things You Need To Know About Flying Squirrels 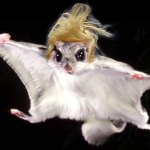 I feel a sense of foreboding in the pit of my stomach. It feels similar to the feeling I had leading up to Y2K when I was certain that some bad things were going to happen.

I still can’t shake the feeling that I wasn’t wrong to be uptight about Y2K, and all that saved us was a bunch of really smart and dedicated people working around the clock to successfully avert a multitude of problems. Was I right to feel so worried? The consensus seems to be that I was not right and that there really was no impending disaster. It’s not unanimous, though, so who knows? Google is your friend. There’s a lot of information available about this.

What I can tell you is that I don’t get the impression that as many smart people are working as hard to prepare for whatever it is that President Toddler is engineering.

I’m well aware that I’m prone to seeing the boogeyman when I’m tired or stressed or otherwise off-kilter from my normally left-leaning-somewhat-cynical-but-more-skeptical-and-only-smart-enough-to-know-how-dumb-I-am self. So I’m going to take a conscious step back from the situation in America for a while because if any of the stuff I’m conjuring up by reading the opinions of experienced, smart journalists and political observers and mental health professionals, then we are in a very bad spot indeed. I’m not in the right frame of mind to deal with that at the moment, so I’m going to focus on other things for a bit and cut way back on my comments on social media.

You know what would make this easier? Finding out that I’m depressed or in some way clinically mentally ill. That would be a relief because I’d be abe to say “I was sick”. I don’t want what’s happening to be happening and I sincerely want to look back on this one day and say “I over-reacted again…because I was unhealthy at the time.”

No matter what side of the political spectrum you lean towards, the one thing nobody can argue is that we’re seeing something right now that most of us have never seen in our lifetime. That’d be great if we were talking about the resurrection of Christ or David Lee Roth hitting all the notes. Instead, we’re constantly talking about this inexplicable twat who is intentionally doing whatever he can to unsettle everything and everyone on the planet*1Why on earth would he antagonize the Prime Minister of Australia?. 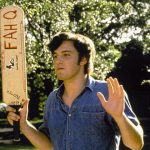 I’m all for change and trying to fix a clearly broken system, but there’s a way to do that and it takes time and intelligence. Barging in and being a belligerent, self-absorbed asshole doesn’t make you a “mover and shaker”. It makes you Fred O’Bannion. It seems obvious that a better approach would be to come in as Mitch, but strive to be Pink. Ask for advice, take your lumps, learn your lessons, bide your time. Once you’re a senior and the rightful captain of the varsity football team, you can affect real change because people respect you. 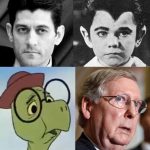 This is – for very good reason – frightening a lot of people, and that’s no way to run a country. I think we can all agree that America is now very much a country divided. It’s worse than I’ve ever seen it. If we can believe what we read, even the Republican party*2Again…he’s a Republican in name only. He’s actually an opportunist. He’d have run as a Flying Squirrel if he’d thought that would get him in. isn’t sure what to do with this guy, but they know something needs to be done. Unfortunately, the “people” with the power don’t seem to be doing anything*3“people” is in quotes because I’m pretty sure you can’t be categorized as a human if you don’t have a spine. But fuck science, right?. Worse still, they are sycophants. I’m looking at you Eddie Munster and Toby Turtle.

However, it seems like it might be worse than we originally thought. More and more, it appears that the gin-soaked Imperial Grand Wizard, Steve Bannon, is actually calling most of the shots. Every day, it’s looking more like Bannon may well be a special kind of evil*4He’s unique. He’s a “snowflake”. Even Dick Cheney, the previous Heavyweight Champion of Evil in America, seems to think he’s an asshole. I never did like Dick Cheney, but at least the guy had decades worth of experience in Washington. Bannon appears to be running wild with his awful and hateful ideas. He has no idea*5or maybe simply doesn’t give a shit about the law or the constitution. All he needs is a fluffy cat and he’d be a real-life Bond villain.

All of this, and the sheer daily deluge of “Holy shit, what now?” is having the effect of people installing browser plug-ins that filter out any mention of Lord Dampnut. They’re weary of the nonsense that’s firehosing out of the Whitehouse since January 20. While I understand the impulse to tune out, that is unfortunately exactly what Drumpf and Bannon and Conway and Pence and Spicer want. It’s great for them when you get fatigued and stop paying attention because then they can do whatever they want. So far I haven’t seen a single indication that what they want is any good at all. I implore you to remain vigilant. Democracy is messy. Freedom is not free. Choose your cliché and run with it. It’s more important now than at any time I can remember. Resist.

On a more personal note, my distaste for Donald J Drumpf has nothing to do with his political affiliation. This is purely personal values. The litmus test for me can be articulated as “Would I be proud of this person if he was my own father? Would I hold my head high and defend him in the face of all his divorces and bankruptcies and alleged sexual assaults and outright lies and generally thin-skinned horseshit?” The answer is no, and if a person isn’t good enough to head up a family unit, he’s sure as shit not good enough to head up the free world.

You may very well feel differently and justify these behaviours by saying “He’s rich, and that’s all that matters”. Or you may feel some obligation to support the GOP simply because they have someone sporting a label that appeals to you. I don’t understand that, but you’re free to do whatever you want. For now.

Sorry about the misleading headline. I’m taking a course on how to promote my blog, and they said catchy headlines are important. Here’s the list of Ten Things You Need to Know About Flying Squirrels:

Anger with a purpose, Fuck You I'm Right, Politics