A guy I went to high school with died last week. He had some serious health problems that caught up with him. I guess I’m getting to that age where people I grew up with are going to start dropping with increasing frequency.

We were never friends, simply acquaintances. I’ve seen him maybe twice in the last 35 years. However, he was the best friend of a guy I’ve known and loved since second or third grade. It’s a gut punch for him, kind of like it was for me when my friend Fiona died 5½ years ago. You never get over that shit.

I prefer phone calls and personal interactions to email threads that CC 54 people or Facebook posts in which all the grief groupies pile on. The whole world doesn’t need to be privy to my feelings. It’s not about me. It’s about the people who’ve suffered a devastating loss and are in pain.

I know this makes me look callous to some because it appears I’m not participating in the pity parade. It often prompts a “why haven’t you chimed in on this?” reaction. When people ask me that, I usually ignore them because it’s none of their fucking business. I’m not saying my way is better, I’m simply saying it’s my way.

I made a phone call and had a nice chat with my old friend Gus. He was (and is) hurting, and he will be for quite a while. I think he appreciated my call more than yet another “Condolences on your loss. Sending my thoughts and prayers” comment on his Facebook wall. Instead of taking 10 seconds to make a hackneyed observation about someone’s death before moving on to the next funny cat video, I took the time to listen and let him know I care about him. Perhaps it made no difference to him but it was the best option available to me.

I like to think I’m not the only one who operates like this. I like to think most people take my approach but we don’t know about it because they don’t write a blog post about their life every Monday.

RIP, Vic. I mourn your death, I ache for your family and friends, and know you left the world a better place than you found it.

A rising tide lifts all boats…

I’ve heard the phrase “A rising tide lifts all boats” a number of times over the last few weeks. As with most cliches, it’s a ridiculous oversimplification that only holds the tiniest amount of truth, if any at all.

A rising tide only lifts a boat that’s tied to a pier at low tide until that boat reaches the end of its rope. Then the boat gets swamped and anyone onboard drowns. The boat is being held down by things beyond its control, leading to misery for those who find themselves sitting in it.

Some people never have the resources to purchase a boat. Those people eventually drown.

Had enough metaphors? Want a real-world example? OK…the cost of housing. My parent’s generation had a realistic expectation of owning a home in the city they chose to live in. The rising tide of real estate prices has changed that expectation to a pipe-dream for my kid’s generation, especially if they choose to live in a “desirable” location like a major city. I will never understand how $400,000 can be described as an “affordable” property.

A few years ago I was having a conversation with the driver of a city bus that I was the only passenger on. He said he felt bad for my generation. He said he and his wife had managed to buy a house in a nice, middle-class neighbourhood, buy a car, and send their four kids to university, all on his bus driver’s income*1His wife was a stay-at-home-mum. He didn’t know how any of his kids would be able to duplicate that accomplishment. They are facing housing costs that are literally 10X what he had faced, while income has not increased 10X in the same time frame. Post-secondary education is out of reach for many families. Some cars cost more than houses did 50 years ago. So screw you and your rising tide.

Next time you decide to utter any nonsense like “A rising tide lifts all boats”, make sure I’m not within earshot. I will call you out on your myopic bullshit. 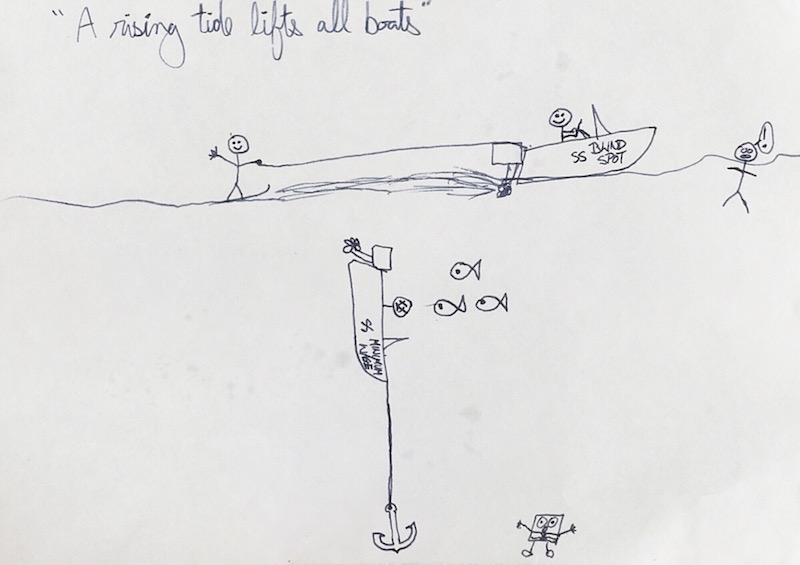 Sarcasm is intellectually lazy and is the “comedic” tool of choice for people who simply aren’t funny.

At my previous job, my bosses would harp on me for not having a sense of humour*2That’s ironic. I’d say to them, “I’ll laugh all day as soon as you say something funny.” They’d often reply with a sarcastic remark. I’d stare them down.

Have I mentioned I’m currently unemployed?

I’ve been teaching guitar and bass at my friend Paul’s School of Rock franchise for the last couple of months. I only realized last week that I’m once again getting paid to do music.

The fact of the matter is that I’m making about the same amount of money for teaching two hours a week as I used to make playing a full week in a B-circuit rock band sometimes. Bonus points for not having to share a room with a guitar player who gets so drunk that he pees the bed regularly.

My students are little kids. I’m old enough to be their grandpa and yet we bond over a love of U2 and Van Halen. Some kids today have poor taste in music*3That’s always been true. Remember disco? but I’ve found that kids who want to learn an instrument have great taste. They don’t want to learn Selena Gomez songs. They want to learn Imagine Dragons songs.

Teaching has helped me understand that I’m actually a pretty good musician. It’s easy to lose perspective when dealing with musicians who are still gigging regularly and have kept their chops up. However, I’ve been playing guitar for nearly 40 years and can confirm that muscle memory is a fascinating thing. I’m surprising myself with my physical dexterity, recall of long-forgotten riffs, and ability to pick up new songs quickly.

The icing on the cake is that this is a part-time gig. It fits nicely into my plan to have half-a-dozen smaller sources of income rather than one big one. 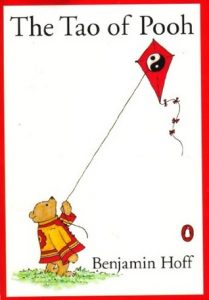 The Tao of Pooh by Benjamin Hoff

This book changed my life for the better in quantifiable ways.

I still keep a small honey jar half-filled with water with a cork floating in it on my desk because it’s my way of getting back in touch with the Wu Wei.

When I start freaking out because life is stressful, I shake the shit out of the jar to try and sink the cork. The cork won’t sink, of course. It puts up no resistance to the chaos it’s enduring, and when the shaking stops it simply pops back to the surface and continues to float.

I try to be the cork. It takes awareness and effort and I don’t always succeed. However, I’m much better at it than I used to be. It’s a journey.

If you’d like to buy The Tao of Pooh (or anything else), please click here to go to !ndigo.ca and I’ll get a little financial reward for sending you there to spend your money.

That’s it for this week’s dispatch, kids.