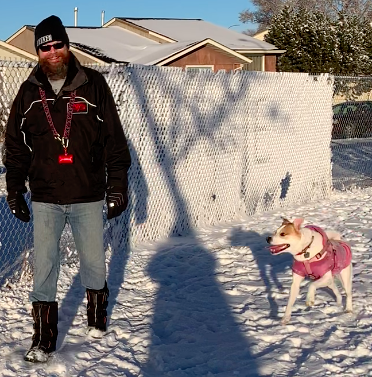 A moment in time… 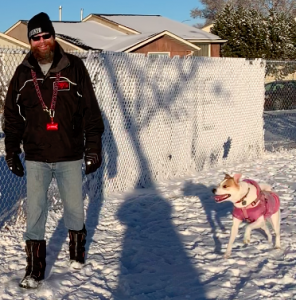 I truly am as unimportant as I think I am in the context of my place in the universe, and yet I’m more important than I can imagine right here, right now*1So are you, at this moment. Sitting on the stairs with Alice Pancakes, absorbed in a painting. Lost in a moment.

That is what I seek from my life. An ongoing series of moments that, taken individually, aren’t significant. But strung together they represent a life well lived. I wish to be a person who is built from uncountable tiny things and only a few big things.

It was my birthday on January 8th. It wasn’t “a big one”. It was “just another one”. So much so that I forgot about it until Mrs. Pancakes reminded me. I dropped her off at work and she said, “Happy birthday!”. I looked at her like a cow looks at an open gate. I had no idea what she was talking about for a few seconds until my little brain got all caught up on the situation. In my defence, it was 8 AM and I usually don’t wake up until 10.

I miss getting excited about my birthday like I did when I was a kid.

It’s an absolute shitstorm inside my brain right now. It shouldn’t be. There’s no reason for it to be. But it is.

Before I got prescribed an SSRI last summer, I was writing up a storm. Then the pharmaceuticals kicked in but they didn’t really feel like they were doing anything except making me sleepy and lazy. It certainly wasn’t doing what my doctor told me it was going to do, which was “to provide a noticeable uptick in my motivation and general sense of well-being”. I lost the will to write and I lost interest in music, but at least I wasn’t constantly thinking about killing myself.

In light of all that, I started weaning myself off the SSRI at the beginning of January. It’s a little frightening that the old cliché seems to apply to me; I have to be embroiled in upheaval of some sort to be creative. Good stuff doesn’t pour out of me unless there’s gnarly stuff pushing it up from the bottom, apparently.

I hate feeling how I’m feeling inside right now, but I adore how these sentences are writing themselves with no input from my faulty brain. I guess I’ll talk to my doctor and see if we can approach this differently. I’d very much like to be happy and creative simultaneously.

This isn’t rolling out*2pun intended how I envisioned it. I had a structure and order all planned out. Then I heard this question 50 times a day at the store;

“What’s the highest THC you have?”

That’s a poor question because terpenes are a thing. Not many people know about terpenes yet but we’re out to change that. The short primer below is good but it stops short of explaining “the entourage effect”, which is the term for how various terpenes interact with the THC and CBD molecules. Once you know a little bit about terpenes, you can manipulate the chemistry to customize your experience to meet your requirements and desires.

Terpenes don’t have to be native to the cannabis plant to be effective. If you want to increase the effect of THC, eat a ripe mango half an hour before you smoke or vape. The myrcene in the mango can make your 15% weed feel more like 20%. Conversely, if you get too high, go to your kitchen cupboard and grab a few black peppercorns. Chew them up and swallow*3It tastes like shit but it’s better than being all panicky and/or paranoid. The beta-caryophyllene will counteract the effect of the THC and get you back to a more comfortable state of mind.

Terpenes and the entourage effect are too much to discuss in one little blog post. They’ll come up over and over again in future posts.

Pro Tip: the best question to ask at your local dispensary isn’t “what’s your highest THC?”, it’s “what strain is the staff excited about?”.

I haven’t finished this book yet because I’m savouring it. It’s more like a fine sippin’ whiskey than a shot of ‘shine. Consuming it too quickly would be a waste of all the thought and passion that went into making it.

It’s astonishing that Yuval can take on such an overwhelming topic and make it digestible for us regular folks.

You owe it to yourself to read Sapiens.

Am I back on track? Who knows…probably.

Does it really matter? Nope…probably not.