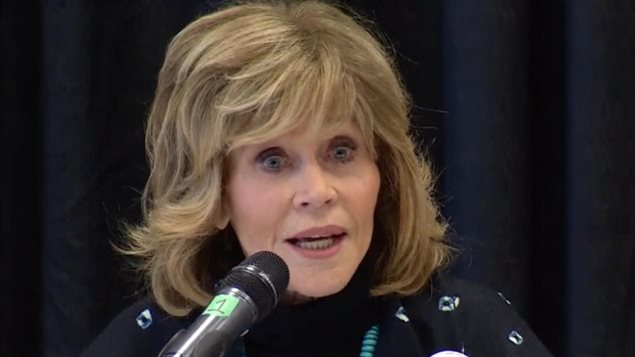 Earlier this week, Jane Fonda showed up in Ft. McMurray to tour the oil sands and make some comments. In 2015, Leonardo DiCaprio said something incorrect about a local weather pattern known as a Chinook being evidence of climate change. In 2014 Neil Young said what he felt needed to be said about the oil sands.

In all three cases, many of the locals lost their minds. “Celebrities shouldn’t be commenting on this or anything. They should stick to acting/singing/whatevering”, they said. My response to that is “why?”. The answer always sounds to me like “…because they have a bigger audience than me, and I disagree with them, and that makes me envious, so they should shut up.”

I’m not sure where the “you’re allowed to have an opinion” line is drawn. Apparently, if you’re a human who sells cars or drives a bus, you can have an opinion. If you’re a human who acts or plays music, you can’t. Unless the musical human agrees with the driver human, then the musical human’s opinion is valid. It’s like being in third grade; “boo hoo…Leonardo was mean to me!”.

Has anything any celebrity has said about Ft. McMurray – either pro or con – ever changed our oil consumption habits?

Oil is part of every. single. thing. that we use every day of our lives in the first world. Either in production or transport to market, oil is what makes our lifestyle possible. Am I personally happy about that? Not really, but it is what it is until we find a more efficient and cleaner energy source. I’m certainly not willing to not have a warm home in the winter. I like wearing shoes. Cars and planes are handy. I’d say I’m in the majority in that regard.

Nothing a celebrity says about it has any impact. None of us has any control over where their gasoline is sourced or refined. Nobody knows or cares where the oil in their frozen waffle packaging came from. Jane and Neil can say whatever they want, but so far it hasn’t made any difference at all as far as I can tell. All they’ve done is add noise to the conversation; their own and the reaction of the butt-hurt locals. Meanwhile, Big Oil keeps pulling their product out of the ground in Ft. Mac and jamming it into pipelines that take it to God-knows-where for God-knows-what uses.

Celebrities have to share the planet too. They’re just people, no more or less important than you are. They can have opinions about anything they want, just like you can. Too bad for you that you don’t have the public platform they have. I bet you have something they want too. Didn’t your mommy ever tell you that life’s not fair? That everybody can’t have everything? Harden the fuck up.

If Jane Fonda says something you don’t like, then fucking IGNORE HER. No news organization on Earth will pursue a story that gets ignored.