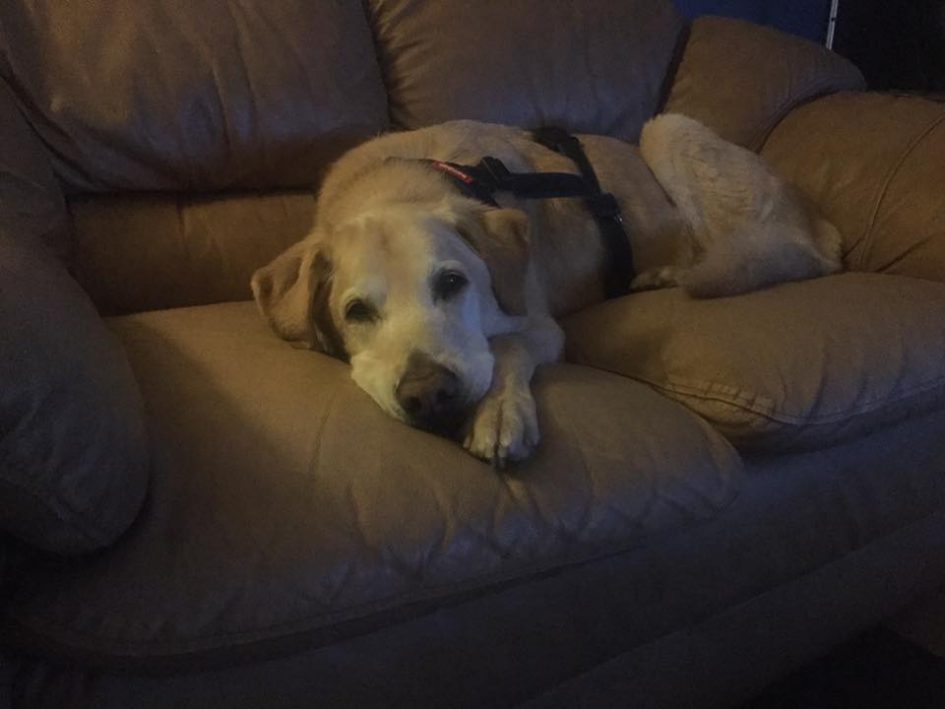 Over the summer, we had an unusual amount of thunderstorms. Far more than usual. Zeke has never been particularly bothered by storms. He’d sometimes run from the front window to the back, barking at the noise, but he was never what I’d categorize as “stressed”. He actually looked as though he might be enjoying himself.

After one particularly noisy storm, we found him standing in the kitchen with his legs splayed. He wasn’t moving and he looked scared or confused. We thought he’d maybe had a stroke or a brain tumour had reared its head. Whatever it was, it clearly wasn’t good. Zeke is 14 (98 in human years), so naturally we thought the worst…this was it. We were going to lose him.

The storm had finished at about 9:30 PM, so the vet was closed. All we could do was keep him comfortable until the next morning. I slept on his bed with him that night. I kept one hand on his shoulder because it seemed to reassure him. It wasn’t comfortable. It was like being “the big spoon”, where you don’t know where to put the arm that you’re lying on. But I thought it was my last night with him and I wasn’t sleeping anyway so it didn’t matter too much. I kept whispering in his ear “If it’s time, it’s time. You’ve been the best friend a guy could ask for. It’s OK if it’s time”. In hindsight, those words were more for my own benefit. I was trying to prepare myself for the shitty decision that all pet owners are familiar with.

Joanne couldn’t sleep either, so she took to looking on the web to see if there was anything we could do. I don’t know what her search terms were. Maybe “best friend has shifty eyes and fucked up balance”? At any rate, she was mildly optimistic when she came to tell me that it might be something called Idiopathic Vestibular Disease. It’s an inner ear disorder that messes with the balance centre in the brain. Zeke had all the symptoms; nystagmus, a tilted head, and falling to one side. If he was human, you’d think he was drunk.

Apparently, it’s not an uncommon thing for older doggies to have this happen. When we took him to the vet first thing the next morning, the vet immediately saw what the problem was.  She said we shouldn’t worry. He wasn’t in any pain, and he would eventually improve all on his own. He was dizzy as fuck, but he was basically alright.

He couldn’t keep his balance enough to eat or drink properly, so we had to give him a couple of litres a day of doggy Gatorade by IV. The vet said it was going to be $35 each time she had to do it, or they could sell us two days worth for $20 and I could administer the IV. I’m Scottish, so it wasn’t tough to decide that I’d overcome my squeamishness about jabbing him with a needle. I was far more squeamish about spending the extra money. The veterinary assistant showed me how to do it, and sent us on our way. 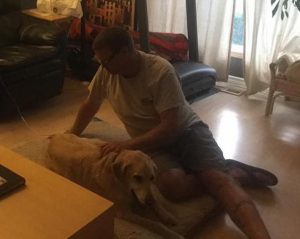 The first time was the hardest, but it had to be done. Turned out to not be a big deal at all. The needle was incredibly sharp, and apparently dogs don’t feel any pain in the loose skin between their shoulder blades. After I’d done it once, it was no problem to continue the treatment. The lesson was “Try new things. They’re probably not as bad as you think.”

Zeke got better each day, and we were encouraged. The after-effects of the disease didn’t seem to be that severe. A couple of weeks later he had a relapse, and that really knocked him on his ass.

He was already losing muscle tone in his hind end, and that combined with David Hasselhoff’s balance is going to cause some issues that will not go away. We have to help him up and down the stairs. He can do it himself if he goes slowly and leans against the wall or railing, but he seems to like feeling a hand on his back just so he knows that if he falls, someone has him. I like to think that if the roles were reversed, he’d do the same for me. He’s going to be like this for the rest of his life.

His other bodily functions are fine, and he’s not hurting, so he’ll be here for a little while yet. He still likes to get up on the love seat to nap, and he still talks to us when he’s hungry or needs to go outside. There’s no getting around the fact that he’s an old guy with some health issues, but he’s doing pretty well, all things considered.

I’d like to thank the staff at Castleridge Veterinary Clinic for all their support, and also my lifelong friend Dr. Shelagh for off-hours encouragement and advice.