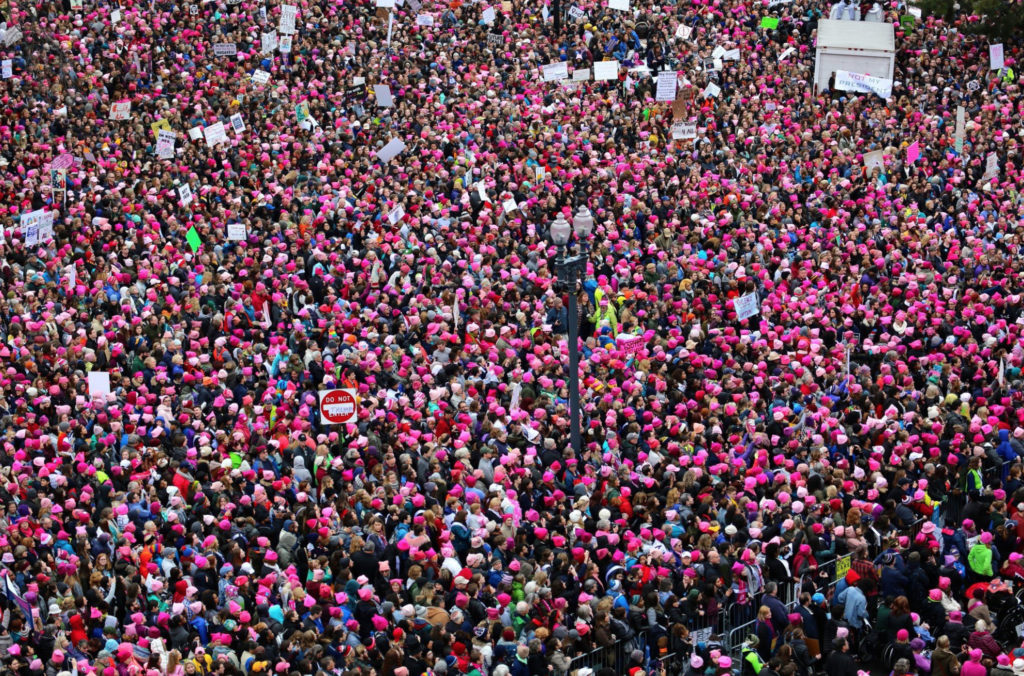 Another in the “5 AM steam-of-consciousness” series, written without editing or forethought…

The idea that something like last weekend’s women’s march felt necessary for millions of people is very unsettling. The idea that the leader of the free world was the inspiration for the march makes me angry at all the people who felt that it was a good idea to vote for him.

I truly thought we had made significant progress on racial issues and gender issues and sexual orientation issues. I knew we had a way to go and some work to do, but because my circle of friends have a positive attitude towards that stuff, I made the apparently huge error of believing that everybody has a similar attitude. It turns that out I’m naive. It turns out that there are millions of people who endorse the attitudes of Drumpf and Pence and their cabal of hate-filled flunkies. It pains me to admit that some of my friends fall into this group. Unsurprisingly, they are all white and heterosexual. Surprisingly, some are women.

I’ve made it a habit to not expect very much from anybody. There’s less disappointment that way, and – occasionally – some wonderful surprises. In general, this makes life easier for me to deal with*1Your mileage may vary.

When I was younger, I was more of an optimist. That’s how young people should be; full of hope. Now that I’m middle-aged (assuming I live to be 106 years old), I’ve lost a lot of my idealism*2Thankfully not all of it, but that’s a different blog post. I understand that I’m unique, just like everybody else. My way of thinking about things is often uncommon, so living day-to-day with an expectation that others will think like I do is a recipe for misery, and I’m already miserable enough. So I expect people to be frustrating and myopic and self-centered.

Look…we all know that the large majority of politicians are grotesque people*3I’m grateful for people like Peter Lougheed and Naheed Nenshi and Barack Obama and Bernie Sanders and Elizabeth Warren. They are power hungry liars who run for office on the pretence of “public service”, and then ignore the public until the next election cycle. Everybody deserves a chance, but what I can’t figure out is why we keep re-electing the awful ones. Worse, we elect awful ones who make no effort to hide their awfulness.

All of us are flawed, and we often find that great leaders are deeply flawed. It comes with the territory, but I’m saying that Bill Clinton’s proclivity (for example) for skirt-chasing does not compare in any way to the absolute bullshit that Drumpf and Pence are trotting out.

Obviously, Americans had to make a choice last November, but I will never, ever understand why so many of them made the choice that they did. That people would put a political ideology ahead of their humanity is unexplainable, especially when Drumpf isn’t even a Republican. He’s an opportunist. If you don’t think he’d have run as a Democrat if he saw that as the more likely route to the Whitehouse, then you are a fool.

And so here we are. People all over the world are marching in protest. American agencies like NASA and the EPA have been forced to “go rogue” to get around Drumpf enforced Orwellian policies. There even appears to be people working in the Whitehouse itself who are revolting against this administration of bigots and imbeciles.

This is unprecedented, and if you voted for Drumpf, this is your fault. I’m sorry you’re not smarter. I’m sad that you’re so scared. I’m angry that you don’t give a shit about people who are different than you. But when it all comes right down to it, I’m a little ashamed to admit that I’m not surprised. Because people are disappointing most of the time.

5 AM, Anger with a purpose, Aye Pancakes Reporting Live from My Recliner, Brain Droppings

A Walk To The Mailbox

Ten Things You Need To Know About Flying Squirrels