Today’s dispatch comes to you from my deck…

Spare me the “I thought you said dick” joke. I already thought of that and it’s not even close to being funny.

We have a south-facing, covered deck. It’s the best thing about this house. In winter, we can BBQ without having to shovel snow or get too dressed up. In summer, it’s the closest thing to paradise you can get for a city dweller. I enjoy eating breakfast and writing here.

I’m watching Alice sniff around the backyard. I like how she keeps glancing up at me. I’m not sure what she’s thinking but I like that she’s keeping an eye out for me. She always starts with the strawberries and finishes with the Zinnias. Once she’s completed her circuit, she lays in the sun for a while and dozes before coming back up on the deck to hang out with me. I have a coffee, she has a Dentastix. We talk about things.

…traditional human names. Names that were popular with our grandparents.

Whenever I go to the off-leash areas, I meet dawgs named Dwight, Bernie, Larry, Sara, Betty, etc. My dog’s name is Alice. There’s another bitch named Alice that goes to the same park as we do.

Used to be that people named their dog something they’d never name a human; Friday, Blazer, Whiskey. Same holds true today. All their kids are named Cody or Kaitlin.

I think a lot of people miss the point of an off-leash area. It’s about giving your dog an opportunity to be free and do whatever it wants for a little while.

I saw a guy last week get angry at his dog because it wouldn’t respond to his yells – in English, not dawg, obviously – to “bring the ball back”. If the dog is having a good time running around with a ball in its mouth, what’s the problem? Let it run.

As long as the dog isn’t being aggressive, let it do whatever it wants. The best part of hanging around with a dog is watching it be a dog. I don’t want Alice to behave like a human.

Book suggestion of the week… 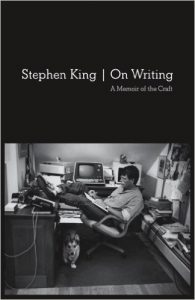 On Writing by Stephen King.

I’m not really a King fan but I found this book to be fantastic. Full of tried-and-true advice for aspiring writers and also full of great life advice for aspiring humans. This is shelved next to Satiristas because I refer to it often. I’ll just open it to a random page and read for a bit until my compass is re-set.

If you’d like to buy On Writing (or anything else), please click here to go to !ndigo.ca and I’ll get a little financial reward for sending you there to spend your money.