25 years ago, I quit playing in rock bands…

There were multiple causes that resulted in the single effect of me giving up on a lifelong dream. I did it cold turkey. It was the only way. I swore I’d never play anywhere other than my studio*1AKA spare bedroom/office/storage room ever again. Maybe I’ll write more extensively about that someday. 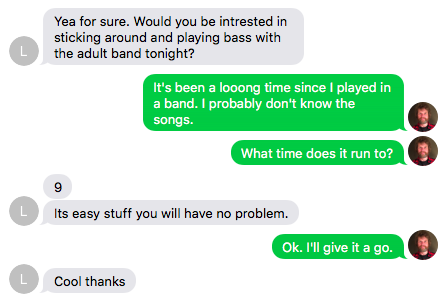 Last week, I played in a band.

Another teacher from the School of Rock texted me and asked if I could sub for the regular bass player at the adult band rehearsal. My knee-jerk reaction was to deflect until I could think of a plausible reason to say “no”.

I mostly played the right notes and I kept decent enough time. Drummer Mike was good, so it was easy to lock in with him. I didn’t do anything fancy; mostly 1/4 notes on the root. Standard stuff for a bass player. Fill out the bottom end and stay out of the singer and guitar player’s musical space. It’s about making the song sound good, not about playing every riff I’ve ever learned.

I had fun. It made me realize I can play just for fun. I learned that music stands apart from all the “business” shit that goes along with it when you’re a full-timer. I don’t have to be pursuing a record deal or a better manager or the next gig. I don’t want to do it full time again. I found out that it’s possible to have a hobby.

I got up early…

My natural rhythm is to sleep from about 2 AM to about 9 AM. One day last week I got up at 6 AM because it was going to be a very hot day and I wanted to get Alice to the dog park before the temperature got over 20 degrees.

Circadian rhythms are not a thing to be trifled with. I bet forcing people to work 9-5 is the source of a lot of misery.  It’s unnatural for a lot of us and eventually, our bodies and brains will respond accordingly. But hey…business and money are the most important thing, right? Screw your health.

That being said, I got some stuff done before noon that I don’t normally get done. I was at the dog park by 6:15, home by 7, out of the shower and full of breakfast by 7:30. I wrote some and read some and cleaned some.

By noon I was ready for a nap, so ultimately no time was gained. It was just reordered in a much less pleasant way. What a way to make a living. It’s enough to drive you crazy if you let it.

We had a bumper crop from the apple tree in the front yard this year. Most of them will end up in the green bin. I’ve thrown out about 100 pounds so far. They got blown off by wind and knocked off by hail and wound up being bruised.

My mum took about 20 pounds of what was left on the branches. She gave me her recipe for apple jelly and some mason jars. Yes, folks, I’m making preserves.

Maybe I’ll raffle off a jar. Biggest donation to the Humane Society wins. 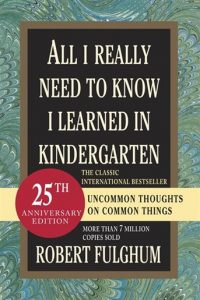 This book lives on my main bookshelf right next to Satiristas and The Tao of Pooh because it contains wisdom that I need to be reminded of periodically. When I’m feeling off-kilter, I can pick it up and choose a random chapter. When I’m finished reading I’ll feel energized and re-centred.

Good sense never gets old or goes out of style.

“I’ve always thought anyone can make money. Making a life worth living, that’s the real test.”

…and the beat goes on.

Talk to you next week.