This is somewhat of a stream of consciousness post. I’m trying it out too see if I find it to be even marginally entertaining.

“People demand freedom of speech as a compensation for the freedom of thought which they seldom use.” – Soren Kierkegaard

I’m not fond of the old bromide  “respect your elders” (Is that redundant? Are there any new bromides?). I’m certain that a large percentage of people don’t even consider the words they’re using when they attempt to convey “wisdom” with such a sweeping generalization. That happens a lot in our catch-phrase hungry society. We want things delivered to us in digestible little chunks that we don’t have to chew too much before we swallow.

Don’t get me wrong, I love a catch-phrase as much as anyone. Kindergarten Cop came out 24 years ago, and to this day I habitually say “it might be a tumour” whenever anybody mentions they’re not feeling well. 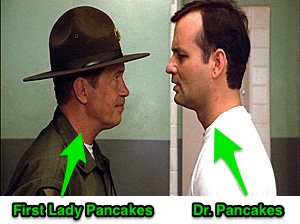 “You have to respect me. I’m older than you” doesn’t work for me. I always want to respond with “but what if you’re a peckerhead?”.

Adolf Hitler was my grandfather’s elder.

Respect is not a right based on your birth date, it’s granted based on your worthiness, on your actions, on your words and behaviour. It is not granted based on a cliched phrase from a bygone era when people did as they were told without questioning the status quo. When kids were seen and not heard. You didn’t dare question it, otherwise your elders would beat some sense fear into you.

Everybody – regardless of age/gender/race/etc. –  starts at a respect baseline with me. They can increase or decrease how much I respect them based on the way they conduct themselves. It’s a pretty unforgiving scale. Once you’ve lost respect, it’s pretty hard to regain it. Respect needs to be earned. People aren’t entitled to it just because they’ve managed to not die.

I’m an old guy now. I don’t have any illusions that people younger than me should respect me just because I’ve managed 51 trips around the sun. They should respect me if I treat them with respect, or if I do something that makes life better for others. It doesn’t have to be anything extraordinary. Even if all somebody can manage is to not be a dick, that’s worthy of a measure of respect.

Here’s what I want to say to young people…

Many have had the imagination beaten out of them by their average life. Half of them are of less than average intelligence. Most of them haven’t achieved their childhood goals and dreams. They thought they had to settle for something less so they could pay their mortgage, and now realize that was an awful decision.

They might see you as a threat to many of the things they’ve become accustomed to, even though a lot of those things are shitty and not worth becoming accustomed to. Deep down, they may want you to be as big of a failure as them because that might at least help them justify their own mediocrity. I’m an expert on this, because I’m one of those people. The difference is that I acknowledge it and am trying to deal with it, whereas others fall back on “respect your elders”. I’m nothing if not self-aware.

People have experiences, and those experiences contribute to the formation of their attitudes. It happens to everybody, so you better make sure your experiences are as great as possible. Choose good mentors. Don’t get old and bitter. Become a person worthy of respect.

Ignore all the curmudgeonly comments about how you wear your pants. Geezers like me were wearing fashions that our parents hated too. Trust me, lowriding your pants is no worse than wearing jeans that were so tight that the gynaecologist could do a reasonably thorough examination while you were still dressed. That was the 70’s. Some of you little hypocrites will be bitching about what your kids are wearing someday, too. Others of you will see fashion for what it is; meaningless.

Question authority. Always. The worst that can happen is that authority gives you a reasonable and well considered answer that helps you improve your life. A lot of the time it will just be a thoughtless “that’s the way we do things because that’s the way they’ve always been done“. You can and should ignore that. Don’t be afraid to ask “why”, and keep asking “why” until you get an answer that satisfies you. As grown ups, we owe you that. But keep in mind that you’ll sometimes get an answer you don’t like. That’s very different than not getting an answer. You’re still inexperienced. That doesn’t mean your ideas aren’t any good. It just means you’re inexperienced.

There are plenty of adults with lots of good advice and insight to offer you, but there are plenty who are just complete dicks. Learn to distinguish between the two. You’re under no obligation to respect them unless they prove themselves worthy of it.

To all the adults that bitch and complain about what kind of kids you are, I say “shut up, you sad, intellectually barren loser.” Kids today are no worse than kids of every generation that preceded them, and in some ways are much better.

I saw this posted on Facebook not long ago, and immediately said to myself “…except it’s not the kids today who are saying “don’t try this at home”, it’s people our age who grew up to be litigious and paranoid.”

“Kids today are just getting dumber. All they do is watch TV and play video games. They’re idiots. My generation was so much better” – Old people

“I can’t figure out how to use (insert technology here)” – Old people, later that same minute, complaining about things that young people have invented.

Is that irony, or lack of self-awareness?

You see those ridiculous pictures that get passed around social media about how much better things were “when we were kids”, and some things were better, but not having bike helmets wasn’t one of those things.

The message here is “I don’t understand the meaning of the word respect. I think it means that killing your kids is a better model.”

Anger with a purpose, Fuck You I'm Right