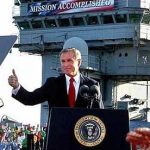 I want to stop using the word “is”, as in “this is funny”, for example. Because maybe it’s not funny to you. Instead, I’ll be trying to say “I find this to be funny” and you can decide for yourself.

I think this went pretty well. I slipped up a few times, but overall I’m calling this one “mission accomplished”. Bad habit corrected.

I’m done reading comments on the internet, particularly on news stories. I no longer feel like expending brain power wondering how so many people can be so incredibly stupid. Opinions are like assholes; everybody has one and they all stink except mine. As for Facebook and blog posts and the like, my goal is to present and then move along. I’m weary of engaging. I’ll leave the discussion and “joke improvement” to others while I try to find other stories and topics that interest me. Besides, comments are rarely funnier than the original post.

There were a number times where I read comments, and a few times I responded when I shouldn’t have. The US election was so heated and divisive that I got drawn into it. I regret it, and nothing good ever came from it. This is going back on the list for 2017 and probably 2018…or until people stop being dimwitted twatwaffles. Seriously…DONALD DRUMPF?! If you think he’s…oops…carry on…

I want to speak more nicely to family members. I find I can be calm and polite with the stranger serving me coffee, and then snap at family. I guess that’s because I figure family will forgive me, and they do…but that’s not the way it should be. I’m going to watch my tone of voice.

I feel like this went reasonably well. I was cognizant of it most of the time, and I think I was much more careful with my tone for the most part despite the fact that my inner voice was seething. It’s hard to self-evaluate this because it’s not up to me to decide if I’m an asshole or not. That’s up to other people.

Specific creative goals I have will be identified once they’re complete. I no longer want to say I’m going to write or record or produce something and then not deliver it because I’m lazy or tired. I want to make things because I want to make them, not because of some promise I made to other people.

I’ve been getting up between 4:30 and 5 most mornings to write. It’s working out really well, and I’m proud of myself for doing something that felt, and still feels, so unnatural. It’s led to me stumbling across a plan that – while it very likely won’t get me out of my job – will keep me (and hopefully you) happier. I have some friends that I don’t deserve who are helping me along with proofreads, and if all goes according to plan, I might be a published author by the end of 2017. I’ll detail the full concept in a later post. It’s actually more of a multi-media thing than simply a writing thing, but writing is absolutely at the core.

I read a little more, but I already read more in a week than a lot of people read in a year. TV is my nicotine, apparently. I think I was able to improve the quality of the shows I spend time with, but I don’t think I spent any less time watching. This stays on the list until more improvement is evident.

More outside. Less inside.

It was kind of a shitty summer. Abnormal amounts of rain spoiled the plans of many people, including me. We got more rain in July than we typically get in an entire year. I thought I’d like to take up hiking but failed 100% on that. I didn’t ride my bike enough. I’m keeping this on the list. Improvement is needed, particularly in my attitude towards being outside when it’s raining.

Conscious effort to be happy and grateful. It’s a choice for all of us. We either create our own plan, or we become part of someone else’s…and lots of people are bitter and sad, even if they don’t realize it. I’m not out to be the village idiot who’s always happy no matter what. I’m out to be a person who tries to always see the best angle. That being said, sometimes there’s no good angle.

Work has been really awful at times. It’s been difficult to get around a lot of the petty nonsense I have to tolerate from a particular person in the office. I’m going to be generous with myself and call this one “done”. If I can get through what I got through, I feel like I’ve done well. Onward and upward…